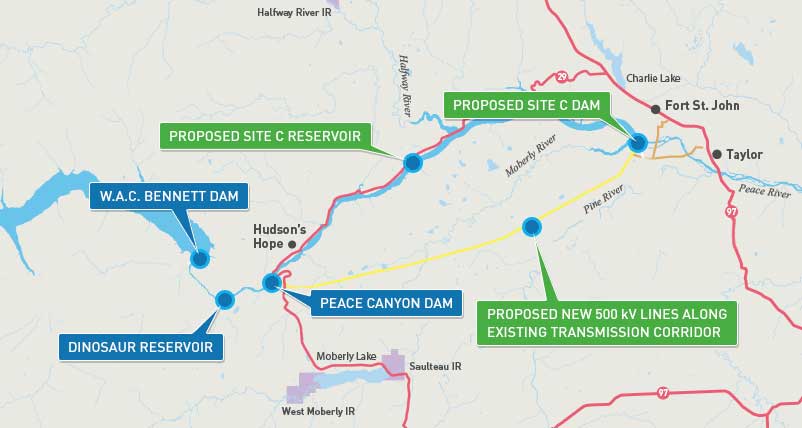 Premier Christy Clark just announced that the Site C Clean Energy Project was approved by the BC Government.

The estimated cost for the project is $8.8 billion and the proposed opening date for the dam would be 2020.

Christy Clark says that the Site C dam will be “affordable, reliable, clean electricity [that] is the backbone of British Columbia’s economy”. She goes on to say “Site C will support our quality of life for decades to come and will enable continued investment and a growing economy.”

Energy Minister Bill Bennett says that the electricity rates in British Columbia is the 3rd lowest in North America and the 4th lowest for industrial and commercial users.

He also said that the dam is needed with the population of BC expected to grow by over one million people and the demand of electricity to go up by as much as 40% over the next 20 years.

He says the advantage of hydroelectric energy is that it is relatively clean compared to natural gas and coal and no one knows what the cost of coal or natural gas will be in 20 years.

The BC Hydro Site C Clean Energy dam will be built in the Peace River in northeast BC. It has the capacity of 1,100 megawatts (MW), and will produce around 5,100 gigawatt hours (GWh) of electricity every year.  That is enough energy to power around 450,000 homes per year in BC.

As this would be the 3rd project on one river system, the Site C dam would be significantly more efficient because it will be able to take advantage of the water already stored in the Williston Reservoir. This means the Site C dam will produce 35% of the energy the W.A.C. Bennett Dam produces with only using 5% of the reservoir area.

Initially construction was scheduled to start in January 2015, however the construction has now been delayed to summer to allow more time to finish getting the permits.