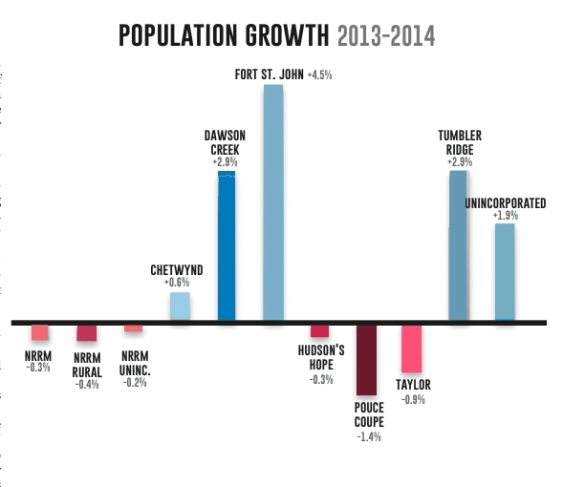 The population in the Peace River Regional District grew significantly from 2013 to 2014.  According to new information from B.C. Stats it shows that the city of Fort St. John grew by the second largest percentage in British Columbia at 4.7 per cent. The population went from 20,553 to 21,523.

In the surrounding area Dawson Creek and Tumbler Ridge have also seen a significant increase in the population from 2013 to 2014.  This increase in population can be attributed to the flourishing economy.

On the other hand the Northern Rockies Regional District showed a slight dip in population numbers for 2013 to 2014.

Lakeland Country, located near Okanagan saw the biggest population increase in BC at 5.6 per cent.

The B.C. Stats that came out on January 15, 2015 estimated the sub-provincial population stats by drawing upon health registration information and power hook-ups.

The stats provided by BC Stats lumped the Peace River Regional District into one section (except for Northern Rockies Regional Municipality). The area grew by 2.8 per cent as a whole from 2013 to 2014 which equates to 64,480 to 66,321.

Councillor Trevor Bolin noted the news as being very positive for the city.

“(Newcomers are) starting to see this is the area for employment, quality of life et cetera,” he said. “People used to come up here for camp work, fly-in, fly-out, now they’re moving their families here…I think 4.7 (per cent growth) is just going to be the start of it.”

Everyone wins by this population growth the Councillor stated.  More money is invested into the local economy, salaries increase, more jobs are created, and the overall quality of life is increased.

As the city grows and more buildings are being built more people are moving to the city.

Right now is a great time to learn more about Fort St. John and consider moving to and settling down with a family in the area.