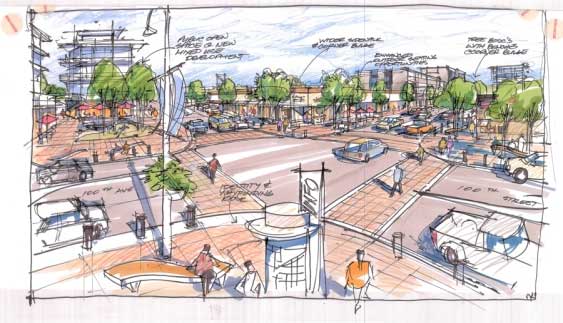 Recently a consulting firm was hired by the city of Fort St. John to come up with ten big changes that would help revitalize downtown.

Some of the ideas included a market plaza, better parking, and a ‘festival street’.

The consulting firm hired to create the proposal was Modus Planning, Design and Engagement. There report did not contain any estimate costs.

The report was widely accepted by all councillors last year during the elections but nothing has yet to materialize.  Councillor Gord Klassen mentioned that he thinks this cities revitalization is necessary to retain the skilled workforce that includes doctors, nurses, and other professionals.

He went on to say that the city needs a downtown where people stay rather than simply drive through.

As much as 16% of store properties in downtown are currently vacant and up to 65% of commercial land is vacant in the surrounding area.  A change needs to be made to revitalize the city and stimulate growth and sales within the area.

Some of the ten “big” ideas to update the city included:

Of all the proposed ideas the one that had the greatest opposition was the reduction of lanes on 100th Avenue and 100th Street.

During the next phase of the report the 10 ideas will be refined down to identify guidelines, policies, and actions for implementation.

The City Council is expected to vote on the new proposed changes later this year.