You may think you are looking at a young Princess Merida from Disney’s Brave👩‍🦰, but in fact we would like to introduce you to FSJ’s very own Adaura–who not only looks like Princess Merida👩‍🦰, but has certainly displayed just as much BRAVERY!💪

Adaura Cayford is a nine-year-old local girl who was recently diagnosed with an inoperable tumour in the pod of her brain. The form of cancer is called DIPG and it is incurable. 146 children are diagnosed with brain cancer every year in Canada and 3 to 6 have had this rare form of cancer. It affects her eye site, vital organs, hearing, breathing and swallowing. The cancer is affecting her balance and she is experiencing excruciating headaches.

While on vacation this summer, Adaura was experiencing nightmares and excruciating headaches. Other symptoms included affects to her vision, hearing, balance, breathing, swallowing and extreme fatigue. This ultimately led the family to the emergency room in Vernon where a CT scan was performed, and the family was sent to Vancouver for further testing. An MRI in #Vancouver confirmed the diagnosis.

The Cayford family were moved to Ronald McDonald house in Vancouver 10 days after diagnosis. Radiation treatment started on September 4th where Adaura has to wear a mask/mold of her head, is pinned down and is stuck on the table for the duration of each treatment. Isabelle, Adaura’s mother, says she has been an absolute trooper. Adaura will only receive 30 treatments of radiation. Canada has no other available treatments to offer if the radiation doesn’t work.

With the treatment in #Canada there is only 1% of a 5 years survival! Most of the children have less than 9 months! The family was approached by DIPG cancer specialists from the UK and Adaura has a chance to enter a drug trial. The first treatment is $200,000 – not including room/board. The trial drugs are showing great results for DIPG.

With your support, we can get #Adaura to the UK to give her a fighting chance!💪

To celebrate her bravery and try to help the Cayford family, friends and neighbours are putting on a fundraiser this fall.

For tickets or to inquire about donating money or silent auction items, text or call Brandi Kennedy at (250) 263-7698. 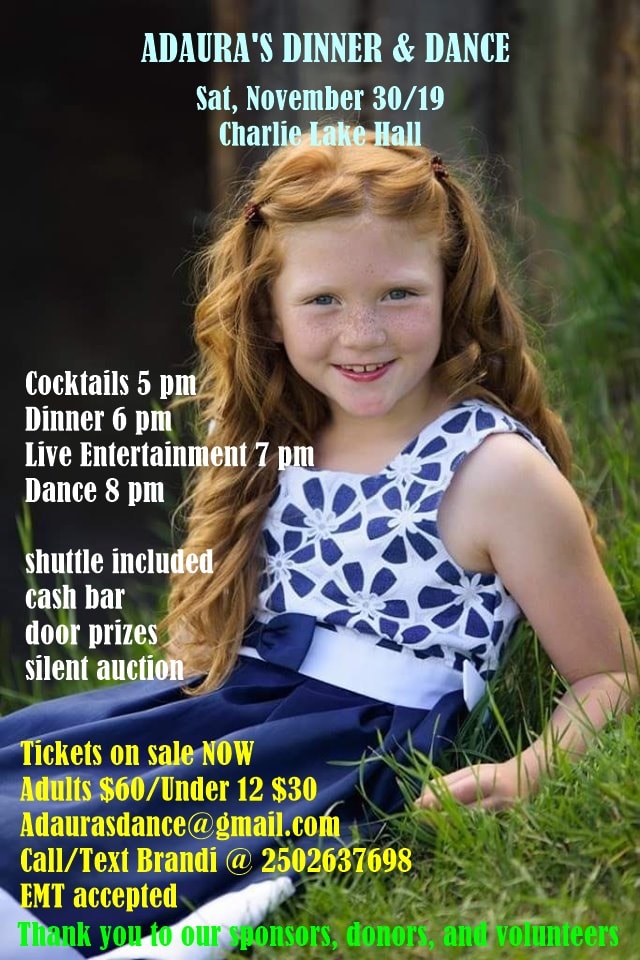